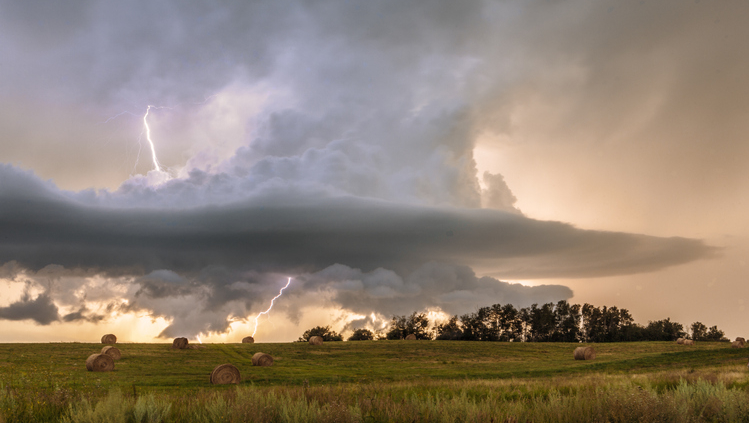 Storms produced hail as large as baseballs across Western Canada resulting in minor damage to early-stage crops and significant damage to mature crops, according to the Canadian Crop Hail Association.

CCHA member companies are investigating more than 649 claims of crop damage during the time period.

He said storms produced hail ranging from pea-size to as large as a baseball.

“We expect to see minimal to moderate damage in the crops at their early stage of development,” Tiefenbach said.

Heavy rain is also a factor in adjusting crop damage.

“The west half of Saskatchewan began drier than normal due to low snowfall and minimal rainfall prior to seeding but many areas have received some rainfall over the last few weeks,” Tiefenbach said. “The east half of Saskatchewan, and into Manitoba, had higher than average amounts of snowfall and above average rainfall prior to and during seeding. Seeding was later in the East half due to the slow melting snowpack and subsequent rainfall.”

He said storms produced hail raining from pea to quarter-size.

“We are still assessing the damage but so far it ranges from moderate to severe,” he said.

The damage was light to medium.

Storms produced hail that ranged from pea to golf ball-size.

“We are seeing a lot of light damage on early-stage crops,” he said. “With seeding a bit behind in most areas, crops are just starting to emerge from the ground resulting in light damage from hail.  We have seen some significant damage in fall rye, winter wheat, and some pea crops.”

The damage was light to heavy.

Heavy rain and wet field conditions are among factors in adjusting crop damage, he said.

The damage was light to heavy.

“Ag Direct adjusters are out and have completed all claims up to the June 19 storm date,” Omelchenko said. “Wet conditions and steady rains have slowed adjustments but adjusters are still completing adjustments in a timely manner.”