Storms in Alberta and Saskatchewan produced hail that resulted in light to medium crop damage with heavy damage reported in at least one area, according to the Canadian Crop Hail Association.

“We are seeing isolated thunderstorm damage,” said Murray Bantle of Co-operative Hail Insurance Company. “The hail activity was light for the week. We finally got some moisture across much of the province.”

Tyson Ryhorchuk, of Rain and Hail Insurance Service, said farmers in the Saskatchewan communities of Consul, Ponteix and the Alberta communities of Trochu, Picture Butte, Coaldale and Coalhurst made six claims for damage to wheat, barley and mustard.

Farmers in Alberta made 10 claims to AG Direct Hail Insurance, according to Beth Shewkenek. Information about the location of the storms and the crops that were damaged was not immediately available.

Scott McQueen of Palliser Insurance said storms resulted in 35 claims to all types of crops in the Alberta communities of Trochu, Three Hills and Picture Butte. Damaged ranged from light to medium. A lack of moisture is also factoring into adjustment of the claims, he said.

Storms resulted in seven claims from farmers in Josephburg, Barons, Walsh, Pontiex, and Frontier, according to Canadian Hail Agencies. 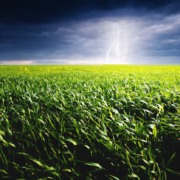 A series of storms across Saskatchewan, Manitoba and Alberta produced hail that resulted in mostly light to medium damage to crops with significant damage seen in a few fields, according to the Canadian Crop Hail Association.

CCHA member companies are investigating 49 claims from the storms, with more than half of those in Portage and High Bluff.

Severe storms produced high winds and hail across Alberta on June 13. Damage from those storms is still being assessed and is not included in this report.

“Farmers have reported light hail on early developing crops,” said Murray Bantle of Co-operative Hail Insurance Company, which has six of the claims in Weyburn and Midale.

“We expect to see light losses at the early stage of wheat and canola development,” he said.

“These were random and very isolated storms,” he said. “The stones were small, and we are expecting little to no damage. Frost and poor crop germination will also factor into adjusting for the storm damage.”

“We are seeing mostly moderate damage, but a couple of fields have fairly significant damage,” he said. “High wind was also a factor.”

Historically, June is among the most active hail periods across Western Canada. Last year, a June 14 storm destroyed crops across Saskatchewan, Manitoba and Alberta. Some insurers said it was one of the costliest June storms on record.

“CCHA member companies are here to help farmers with the insurance coverage they need for a successful growing season in Western Canada,” said Rick Omelchenko, president of the Canadian Crop Hail Association. “Please contact a CCHA member to report storm damage or if you have questions about your coverage levels.”